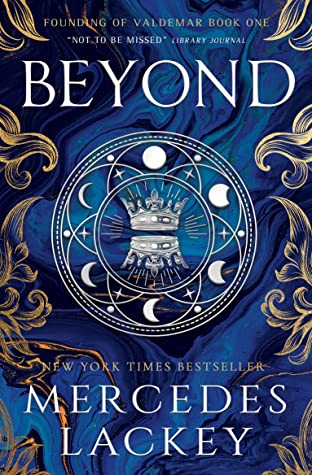 Within the Eastern Empire, Duke Kordas Valdemar rules a tiny, bucolic Duchy that focuses mostly on horse breeding. Anticipating the day when the Empire’s exploitative and militant leaders would not be content to leave them alone, Korda’s father set out to gather magicians in the hopes of one day finding a way to escape and protect the people of the Duchy from tyranny.

Kordas has lived his life looking over his shoulder. The signs in the Empire are increasingly dire. Under the direction of the emperor, mages have begun to harness the power of dark magics, including blood magic, the powers of the Abyssal Planes, and the binding and “milking” of Elemental creatures.

But then one of the Duchy’s mages has a breakthrough. There is a way to place a Gate at a distance so far from the Empire that it is unlikely the Emperor can find or follow them as they evacuate everyone that is willing to leave.

But time is running out, and Kordas has been summoned to the Emperor’s Court. Can his reputation as a country bumpkin and his acting skills buy him and his people the time they need to flee? Or will the emperor lose patience, invade to strip Valdemar of everything of worth, and send its conscripted people into the front lines of the Imperial wars?

I first came across Mercedes Lackey when she co-authored The Ship Who Searched with one of my favourite authors, Anne McCaffrey, back in 1992. At that point, she’s published about thirteen novels, and, following a pattern that I’ve followed all my life, I dove into the middle of a series. [I’ve no idea why I do that: it means I miss out on things and have to go back and read the other books afterwards, which makes no sense] If I remember correctly, the first of her novels I read was Magic’s Pawn, the sixth of her novels to be set in the land of Valdemar.

Magic’s Pawn and its sequels were a revelation. Yes, this was a fantastical realm with magical creatures and telepathic horses, but there was nothing soft and dreamy about it. The good guys didn’t always win – hell, they didn’t even always survive. There were proper real-life issues, and sometimes those issues couldn’t be solved.

Nearly thirty years later, she’s still writing – prolifically, I might add; she’s said to average more than five novels per year! – and she’s written the book I didn’t know I was waiting for, taking us right back to the origin story of Valdemar. No Collegium. No Heralds. No Companions. Just a small rural duchy in an abusive Empire, run by a man with a knack for breeding horses and a plan to escape the clutches of the cruel and vindictive Emperor.

Lackey has lost none of her touch for characterisation in the years since she first wrote of Valdemar. Her characters shine from the page, and I quickly became fully invested in their story. Knowing what is to come in Valdemar’s future, I was constantly on the lookout for anything that could be built on, so I have to assume the fact that Kordas breeds various high-quality lines of  pure white horses might end up being relevant to the evolution on the Companions. I have some other ideas as well, but anything else will include spoilers.

I do wish there wasn’t quite so much swearing in the story, not because I’m a prude but because it just didn’t seem to fit with the story and the series in general. Apart from that, I thought it was wonderful, and completely worthy of being the book that begins it all. I can’t wait for the next one.

I received a free reading copy of this book in exchange for an honest review.