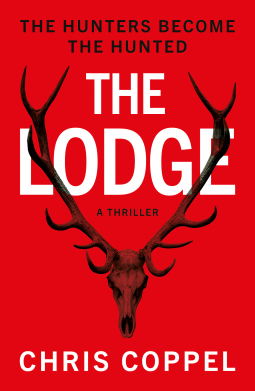 “I wish the animals could shoot back.”

Nestled in a remote area of the Scottish Highlands, The Lodge has opened for business and welcomed its first guests. In previous incarnations it had been a farm, then a vegan mindfulness retreat, but now it was open to the hunters and shooters of the world, offering freshly killed and local meat in its restaurant and local malt whiskeys in its bar.

The small town of Kingussie is Constable Andrew Whiting’s first posting since graduation; unlike most new recruits seeking the excitement of the city positions, it was one he had specifically requested. When the call about a sudden death at the newly opened B&B comes in, it is he who goes out in the worsening snowstorm to investigate. One of the guests has choked on a bone during dinner, so all Andrew needs to do is report in and arrange for the body to be collected – unfortunately, the snowstorm has other ideas.

Stranded at The Lodge with no phone service and no way out through the increasingly deepening snow, Andrew must cope as best as he can. Unfortunately, his training never covered what he was supposed to do when the animals fought back…

The Lodge is a quirky combination of gory horror, comedy, and light-hearted mystery. I love the premise – I find the idea of the animals fighting back to be quite karmic – and quickly became engrossed. It’s not massively long or overly complicated, so rattles along at a fair rate, and I ended up reading it in one sitting. The plot deteriorated the further along I got, and I found myself quite disappointed by the end by how overly explained and pat it became, but it an enjoyable enough read for what it is, especially if you’ve only got a couple of hours to fill.

There was one thing that genuinely annoyed me about this book, but it’s not going to be something that’s an issue for the vast majority of readers, so I’ve left it to be an addendum to the review proper, especially as I’m liable to get a bit ranty.

Early on in the story, there’s an incident involving rats. The rats are described as black in colour and with red eyes. In Great Britain, we have two wild rat species – the brown rat, Rattus norvegicus, which is widespread across Wales, Scotland and England, the species from which pet fancy rats and lab rats were bred; and, the smaller black rat, Rattus rattus, which was introduced by the Romans, and is the species on which the Black Death has historically been blamed (even though it was the fleas that carried the bacteria which caused the bubonic plague, not the poor scapegoated rats), which is now extremely rare, if not extinct, in Great Britain.

Brown rats can have black fur, but a black-furred rat wouldn’t have red eyes. Red (and pink) eyes are commonly associated with albinism, but it is possible to have a coloured coat and still have red eyes. Red eyes are caused by a low level of the pigment melanin, while dark skin and/or fur is caused by a high level of melanin (this is an extremely simplistic explanation). There are fancy rat varieties which have light coats and also red eyes, but dark coated rats will have dark eyes. If you want to be pedantic, there is a newish fancy rat variety (Marten) which sometimes has black hair and red eyes, but at this point I’m going to bow out and point you towards the varieties pages of Hawthorn Rats, which explains the genetics of it all far better than I’ll ever be able to.

I guess my point is that it doesn’t take much to be jerked out of a narrative by a careless error. Red-eyed rats are a trope that’s been perpetuated through the whole of the horror genre, but that doesn’t stop it being wrong. The Lodge is a work of fiction, but fiction which is set in reality needs to keep the factual elements accurate for the fictional elements to work. My issue with the rats is an incredibly niche issue, but for me it stopped me thinking about the story and pulled me back to reality. It could just as easily have been something about cars, or guns, or beer-making. There are always going to be people who know about ‘x’ subject, so the author needs to remember that the facts matter just as much as the fiction.